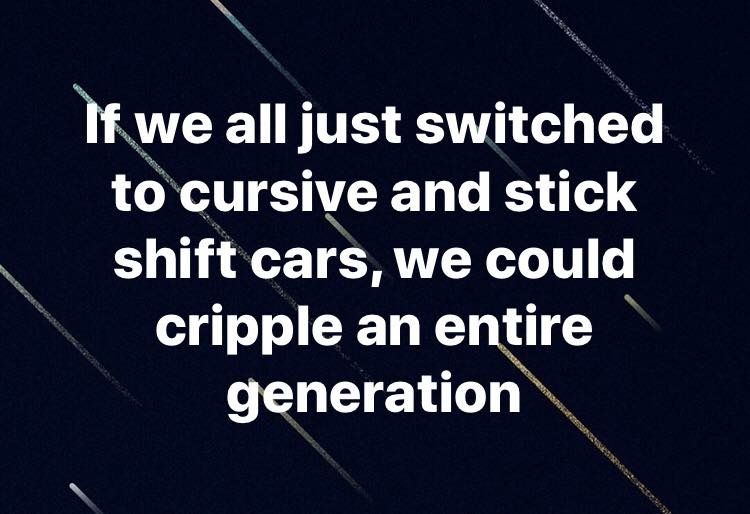 The above meme made the rounds on social media a while back (variations of it still show up, often including threats of rotary phones, as well). After reading it, maybe there’s a little chuckle, a flicker of superiority and perhaps a muttered, “Millennials are useless,” before scrolling on to the next image. Obviously, memes aren’t great examples of intellectual thought and philosophy, but they are solid evidence of popular mindsets. So, what does the above say about all of us?

A few years ago, there were a lot of condescendingly written articles about the growing popularity of “adulting classes.” If you’re unaware, an adulting class is pretty much what it sounds like: young people learning how to function in the world. These classes teach basic skills like “personal finance, cooking, home repair, job interviewing and even etiquette” (Parade.com). One of the first adulting class founders, therapist Rachel Weinstein, noticed that her younger clients were struggling with even the most rudimentary adult requirements. These young people were overwhelmed when trying to manage money or even clean out kitchen pantries (Bloomberg.com). Weinstein started up her class in 2016 and now, the concept is so sought-after that colleges, like UC Berkeley, have to turn kids away from their adulting courses (KTVU.com).

While many laugh at young people for taking a class on how to change a tire, the indictment should be laid at the feet of the elders; it was the responsibility of the older generations to say, “hey, kid, lemme show you how this works.” Clearly, there was a failure in the education of the upcoming generation. Although studies show that Millennials “may be the most educated generation in history” (Study.com), it seems that some pretty important stuff was left out.

When parents pushed their kids to excel at academics, they seemed to have forgotten that not all of life occurs within the classroom. In addition, helicopter parents attempted to “shield their children from the harsh realities of life by doing everything for them” (Parade.com). Rachel Flehinger, principal of the Adulting School, recently attested that parents are still making doctor appointments or calling college professors to contest grades for their Millennial children. Basically, if you never allow a kid to walk, don’t complain when the kid relies on a wheelchair.

Although Millennials aren’t entirely to blame for the flaws of their generation, sometimes they make it easy to shake our collective head in exasperation. For example, Millennials are three times more likely to suffer from narcissistic personality disorder (Time.com). In addition, and maybe as a result of those participation trophies, 40% of Millennials think that, in the working arena, they should be “promoted every two years, regardless of performance” (Time.com). There is no doubt that Millennials really, really like themselves.

Every generation has a problem with the one trailing at its heels. As a Gen Xer, my own people were accused of not caring about anything (we did, we were just taught not to show it) and being too slackerish to make money a priority (as Sinead said, “I do not want what I haven’t got”). Generations don’t happen in vacuums – every other generation has a hand in its creation. So, the next time we laugh at a snotty meme regarding a younger generation, we ought to save some derision for ourselves.