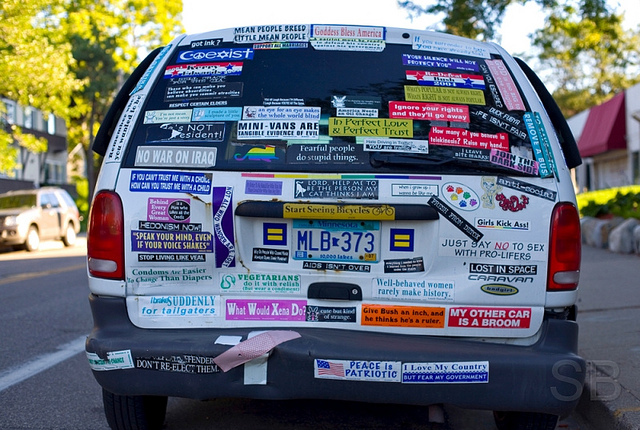 Sometimes, it’s good to show your political views. Going to the voting booth is a good way; donating money to your favorite candidate’s campaign is another. However, during these decisive times, passionately arguing for your side at social functions or at work should probably be avoided. Even at Bourke Accounting, where free expression is valued, we tend to avoid talk that is too political. Americans are sensitive at the moment and political discourse is capable of leading to – unintentional – hurt feelings and ill will.

While it may be ill-advised to voice your views during family gatherings, it seems that more people are desperate to share their particular position with the world. Recently, it’s been difficult to drive without being bombarded by scores of bumper stickers. With all of the conflicting views on display, one starts to experience a sort of dissociative identity disorder when out grabbing a gallon of milk.

Now, we are not only witness to stickers supporting Republicans or Democrats, but rather multiple, controversial topics: Pro-Mask, Anti-Mask, Black Lives Matter, Blue Lives Matter, Pro-Choice, Pro-Life…can’t we just go back to your kid being an honor student? Or, better yet, what about some nice Grateful Dead emblems?

So why this rise in car devaluation? Walter Goettlich, a doctoral student in sociology, suggests that when there’s a “feeling that peoples’ voices aren’t heard at a national or structural level,” (Rewire.org) we see an increase in individualized, public messages, like bumper stickers. When the world is screaming and we are hurting, it’s as though we are powerless to do anything but lend our voices to the cacophony. Think about it, when was the last time you saw a quiet prison scene in a movie? Or even a serene moment that took place in a mental institution? We are in Bedlam, bumper stickers included.

Problematically, a rise in bumper stickers could actually lead to more accidents and erratic driving. Psychologist William Szlemko performed a study in 2008 that showed people with bumper stickers are “16 percent more likely to be the aggressor in incidents of road rage” (ChryslerCapital.com). Crazy, right? However, Szlemko and his colleagues argue that, when a person puts her/his mark on a car, they are effectively marking their property and territory. Because of this, they are much more likely to react in a negative, aggressive way if they feel their territory has been violated (ChryslerCapital.com).

In addition to hostile drivers, our new wave of bumper stickers is leading to hostile pedestrians. For example, as early as 2016, a gentleman’s car was torched and vandalized with anti-That Guy in The White House graffiti. The burning Mustang’s only offense was having been accessorized with a Pro-That Guy bumper sticker. This instance was not the only one, sadly. Many people, on both sides, have experienced spray-paint, broken windows and slashed tires as a result of proudly acknowledging their political allegiance.

We deserve our freedom of speech. We also deserve to be left alone when we exercise it. Going to jail for destruction of property doesn’t get a point across in any logical way. We need to cast our votes and grow up! More so, we need to peacefully respect differing opinions – no matter how hard it is to do.