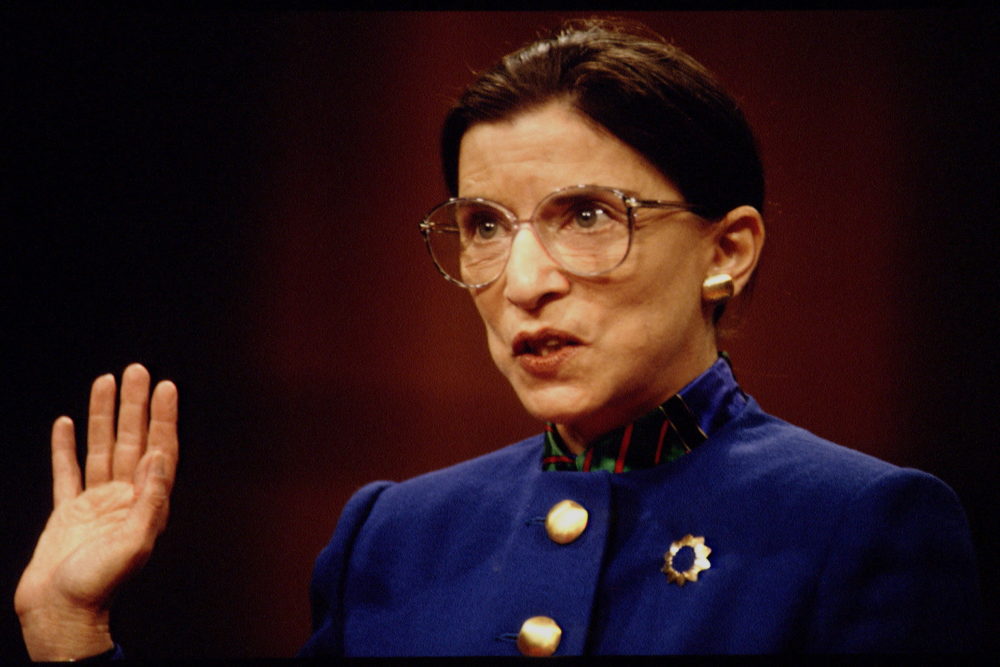 The year Ruth Bader Ginsburg made it to the Supreme Court, I had a hip, young, Converse-wearing math teacher. He delighted in telling his female students that we could be anything: if a door closed in our faces, we were made to kick it down, no man-made barriers could hold us back, the world was ours. After a particularly frustrating day of algebra, when I had decided to quit school and join the carnival, he put a hand on my should (in a non-sexual harassing way) and said, “It’s all right, Sue, we just gotta get you to a “D”. Girls don’t go in for math and science anyway.”

The saddest part was that he meant well. He tried to ease my angst by pointing out that women just didn’t “get” math, so I shouldn’t be so hard on myself. While he wasn’t mean-spirited, he was thoughtlessly demeaning. And his remark wouldn’t fly today because of the efforts of a dead woman.

Since Justice Ruth Bader Ginsburg’s death last week, we have been inundated with her resume and achievements – at this point, we know if she preferred two-ply or one. Because of this, I’m not going to rehash what she did for women, minorities and the fight for equality. I’m more interested in some very curious reactions to her passing.

It wasn’t surprising that Republican Rep. Doug Collins tweeted a callous sentiment regarding Justice Ginsburg’s history of defending women’s autonomy. Ah, yes, the people who care so much about what’s going on in strange wombs very rarely spare a thought to the sentient individuals once out of the womb (i.e. clinic bombings, doctor murders). No, no, we aren’t shocked when this caliber of person negates a woman’s entire existence simply because he would have preferred her to be quiet, demure and preferably close to the stove. What is passing strange is some other views on the matter.

For example, Erin Monahan, writing for Medium.com, denied Justice Ginsburg’s legacy, as well. Monahan wrote that she felt nothing upon learning of Justice Ginsburg’s death because Ginsburg “failed to advocate for all women.” Monahan continued by intimating that Justice Ginsburg will be responsible for any potential murders or assaults of Indigenous women as a result of a gas pipeline under the Appalachian Trail (J. Ginsburg ruled against environmentalists trying to stop the construction). After Monahan accused Ginsburg of sitting “happily on her capitalist throne,” she railed against the elitist, non-inclusive “white feminism” that was Justice Ginsburg. Furthermore, if you grieved at all for Justice Ginsburg, that simply “reveals internalized white supremacy” on your part. Well, duh! Ginsburg had it so easy! What with being both female and Jewish, she would have just been handed a spot on the Supreme Court.

Hey, Ms. Monahan, without people like Justice Ginsburg, you’d still have articles published, sure, but your editor would have put a “Mr.” in front of your name.

Ruth Bader Ginsburg made mistakes. However, her contributions far outweighed those mistakes. It is disingenuous to denigrate an illustrious life and career over not seeing eye to eye on every matter . Justice Ginsburg will serve as an inspiration and a glimpse into a better, equitable possibility.

Bourke Accounting hires women for positions of authority and responsibility. Bourke Accounting, unlike my math teacher, believes that women can do anything when given the opportunity. Why don’t you sit down with a Bourke Accounting bookkeeper or tax preparer and let them show you how it’s done?

Thanks for everything, Justice Ginsburg. You done good.